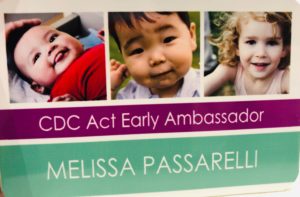 Docs for Tots’ Director of Programs, Melissa Passarelli, is the new CDC Act Early Ambassador for New York State! She recently attended a training at the Centers for Disease Control headquarters in Atlanta to learn about how to use this public health campaign to promote developmental milestones in the early years.

Act Early Ambassadors expand the reach of the “Learn the Signs. Act Early.” program and support their respective state’s work toward improving early identification of developmental delays and disabilities.

Since 2011, professionals with medical, child development, developmental disability, special education, and early intervention expertise have been selected to

As an Act Early Ambassador, Melissa will continue to promote developmental milestones and early identification among families and providers across New York State!

Review the CDC’s Developmental Milestones and access the CDC’s Milestone Tracker App below.

A Roadmap for Long Island In October of 2021 three institutions dedicated to the health and well-being of children declared a National Emergency in . . .
Read More

November 2021 News from Docs for Tots

Check out our newsletter and see what we’re up to 🙂 In case you missed it – here is our November Newsletter. See what . . .
Read More

What happens during the first months and years of life sets either a sturdy or a fragile stage for what follows.